Promoting Function and Independence in the Cerebral Palsy Population 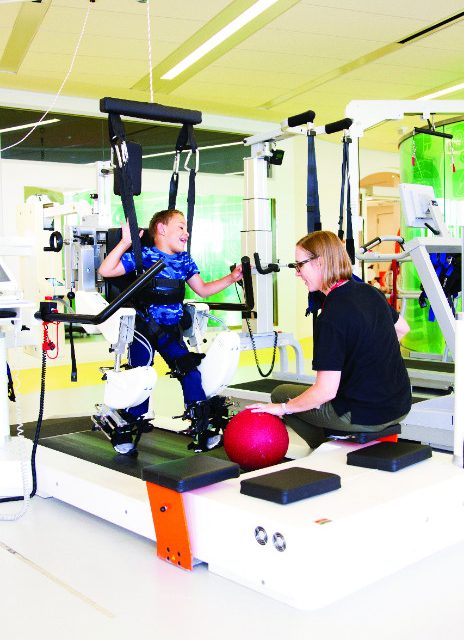 Cerebral palsy (CP), affecting approximately 800,000 children and adults in the United States, is the leading cause of childhood disabilities.1 While CP can affect one’s mobility and independence, both children and adults with CP can live healthy and active lifestyles with the appropriate interventions and equipment. At Shirley Ryan AbilityLab, a heavy focus is placed on gait training and standing with this patient population during physical therapy.

CP is a developmental motor disorder caused by a non-progressive insult to the brain. The injury occurs prenatally, perinatally, or postnatally up until the age of two years. Location of the brain injury can vary, giving rise to a large spectrum of presentations. A child with CP can present with postural deficits, paralysis, abnormal and uncoordinated movements, poor selective motor control, motor delays, and/or muscle tone changes.

The Gross Motor Function Classification Scale (GMFCS) was developed to categorize the variety of presentations of CP. The scale ranges from Level I-V based on the severity of the diagnosis. Level I describes a high-functioning child who can run and jump with few limitations, whereas Level V describes more severe limitations, including poor head control and inability to sit independently. Children with GMFCS Levels I-III ambulate with or without an assistive device independently, while a child in Level IV ambulates in a gait trainer with assistance.

The variable presentation of CP leads to many challenges in discovering a cause, cure, and effective treatments. As research continues in this area, clinicians work to improve independence with functional mobility and minimize the associated secondary impairments. These secondary impairments include contractures, spinal and joint misalignment, skin breakdown, and decreased bone density. These negative effects are especially predominant for GMFCS Levels III-V because of the lack of functional weight bearing (WB) and increased time spent in wheelchairs.

Based on the complexity of the diagnosis, physical therapy interventions are individualized for each child. Walking and standing are common functional goals in the rehabilitation setting as they improve independence with mobility, enhance social roles, and minimize secondary impairments. The benefits associated with gait training and standing programs differ for each GMFCS Level.

• GMFCS Levels I-III: Gait training is commonly used as an intervention, as the repetitive movements follow the principles of motor learning and task-specific training, which lead to improved motor function. The benefits of gait training include improved cardiovascular and muscular endurance, lower-extremity strength, walking speed, gait mechanics, and balance.

Children with CP often have muscle tightness or spasticity, poor coordination of movements, and delayed or absent postural reactions. These impairments lead to limited range of motion (ROM) and balance deficits. As a result, standing programs are designed to minimize muscle tightness and improve postural alignment, postural control, and static and dynamic balance to reduce fall risk.

• GMFCS Level IV-V: Standing programs for children with the more severe cases of CP focus on the secondary impairments associated with growth and prolonged sitting. These children are evaluated for an appropriate stander to ensure safety and accommodate for postural deficits. The stander must fit properly with appropriate alignment of the trunk, hip, knee, and ankle. The child should have full hip and knee extension, midline trunk alignment, and equal lower extremity (LE) WB. However, some standers have features to accommodate for limited ROM. The benefits of performing a standing protocol are to increase bone density to reduce the risk of fractures, improve ROM, and prevent hip dislocations and spinal deformities. Respiration, digestion, circulation, and skin integrity also improve by minimizing prolonged sitting. Standing programs should be five days per week for 30 to 90 minutes to positively affect bone mineral density, hip stability, spasticity, and range of motion of the hip, knee, and ankle.2

Equipment is vital to rehabilitation for children with CP as it improves their independence and ability to interact with peers. To fit the needs of each child, several walkers and standers are available.

As previously noted, gait trainers are used for children who are classified as GMFCS Level IV as they provide increased support and are adaptable in anterior or posterior positions. With this population, there is an emphasis on maximal participation and independence within the device rather than perfecting posture and gait mechanics.

• Body weight support (BWS) treadmill training (GMFCS Levels I-IV): Commonly used in the CP population, the overhead harness system provides support and safety during treadmill training. The treadmill allows for a constant speed, changes in BWS to enhance gait mechanics, and ease for a therapist to provide assistance with stepping. Research has found significant improvements in walking velocity and energy expenditure in children with CP who participated in an intensive BWS treadmill training program.4 Although treadmill training is an effective intervention for children with CP, it is also important to include overground ambulation in the treatment plan for carryover of skills into the community.

• Neuromuscular Electrical Stimulation (NMES) Assisted Gait: NMES is used for children with CP who are limited by weakness and selective motor control. This device utilizes electrical impulses to produce muscle contractions. A trigger or foot switch is used to activate specific muscles during a functional activity. The most common muscles used are the anterior tibialis with or without gastrocnemius, quadriceps, and gluteal muscles. Research has shown functional electrical stimulation of the ankle dorsiflexors in children with CP resulted in significant improvements in gait kinematics and gait speed.6

• Robotic assisted ankle strengthening (GMFCS Levels I-III): Targeted to improve motion at the ankle, a footplate with a virtual reality screen allows the child to play games by controlling the position of the ankle. Overground ambulation, balance, or strengthening are incorporated for carryover of gained ROM into functional activities. Due to the nature of its repetitive, goal-directed biofeedback training, research has found that use of this robotic device has led to improvements in strength, dorsiflexion and plantarflexion ROM, 6-minute walk test, 10-meter walk test, timed up and go, spasticity, and selective motor control.7

• CP Walker: The CP walker provides support and balance to a child during overground walking. Motors at both the hips and knees help guide the child through the gait cycle. Three variables are customized to each child during walking: body weight support, gait velocity, and percentage of ROM at the hip and knee. This summer, Shirley Ryan AbilityLab will be conducting an 8-week training program consisting of two to three sessions per week of walking in the robot. Walking speed, endurance, and balance will be assessed.

• CP Muscle Research: Children with CP have depleted satellite cells compared to typically developing children. These cells are the stem cells for skeletal muscle and are essential for the growth, repair and regeneration of muscle tissue. Satellite cells derived from contractured muscle are severely impaired in producing new muscle tissue. Shirley Ryan AbilityLab researchers have identified a cancer drug, 5-Azacytidine (5-AZA), which rescued the muscle-growing capacity of in vitro satellite cells. After being treated with the drug, the cells grew new muscle tissue better than untreated satellite cells. Although further research and clinical trials are needed, the researchers believe 5-AZA is a promising candidate to help minimize muscle contractures in children with CP.8

Adults with CP experience the negative effects of aging more quickly than typical adults. Therefore, early performance of walking and standing in childhood is important to maintain function into adulthood and decrease pain and future surgeries.

Walking and standing is an important aspect of rehabilitation in the CP population as it enhances cognitive development, participation, mobility, and independence. With the appropriate interventions and equipment, children and adults with CP can live active and healthy lifestyles. RM 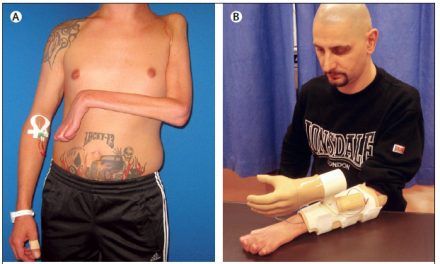 Men Choose Amputation So They Can Wear Prosthetic Hands