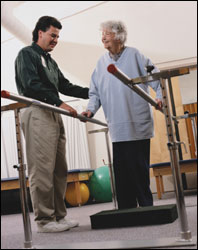 Who would have thought it would be possible to make a living connecting the dots? Yet, that’s exactly what Lauren Rosen, PT, MPT, ATP, Motion Analysis Center program coordinator at St Joseph’s Children’s Hospital, Tampa, Fla, has been able to do—well, sort of.

“The computer sees the dots, but at the beginning it does not know what each dot represents, so the first couple of times the patient is doing things, I play ‘connect the dots’ and tell it what each of the dots is attached to,” Rosen says.

These dots are markers that are part of a 3D graphic program using a number of infrared cameras to record the motion of strategically placed markers on a patient performing an activity such as walking. The result is a 3D image of the person—and a myriad of information for therapists.

“The biggest thing it gives you that you can’t get visually is a transverse plane. This is the one way to see the whole picture all at once,” Rosen says. “We can see everything about what’s going on with them, so we can, with greater certainty, say what the results will be from whatever treatments are going to be recommended.”

Rosen accepts any child—and the occasional adult—for examination in her state-of-the-art motion analysis center. The 3D simulation program also provides reports of the subject’s performance compared with an able-bodied individual.

In addition to building animated models of patient movement, Rosen uses electromyography (EMG), a process in which electrodes are adhered to very specific locations on the child’s legs, such as on top of individual muscles. The system provides detailed information about which muscles are active, and when.

EMG will identify exactly which muscles are moving, helping PTs differentiate between actual problems and compensations.

“With cerebral palsy, for example, there are a few muscles that have a tendency sometimes to be overactive—one being the rectus femoris muscle,” Rosen says, explaining that surgery can relocate the muscle, causing it to function more like a hamstring. “But if the rectus femoris is not overactive and we move that muscle, then that didn’t help. It really is a big puzzle, and this lets us figure out, with some certainty, what is the problem and what is a compensation.”

In most cases, once the problem is resolved, the compensation will repair itself. Rosen also makes use of a pedabarograph, which looks at the forces on the bottom of the foot relative to the floor, illuminating how a patient uses their muscles when walking.

“There are times when you walk that you are supposed to be doing certain kinds of contraction,” Rosen says. “Using this combination of force plates and cameras, we are able to tell how patients are using their muscles.”

The device is somewhat sensitive, and in order to return information, only one foot can touch the mat at a time. Because of this, it is not compatible with those using assistive devices or individuals who take short or shuffling steps.

After putting patients through their paces, Rosen consults with the lab’s orthopedic surgeon to read the study. From this one-on-one analysis, she creates a report that includes suggestions for treatments.

“There are a lot of different recommendations that come out of what we do, one of which is surgery, but as a physical therapist, it is not within the means of my licensure to recommend surgery. If surgery is going to be recommended, there has to be a [physician] involved,” Rosen says. “We do recommend medications to control spasticity, as well as things that are more a PT’s domain, such as assistive devices: If somebody uses one, is it the right kind for them? If they don’t use one, should they?”

Other recommendations include bracing—either evaluating the effectiveness of an existing orthotic or advising on the implementation of a new one. And, of course, the use of physical therapy to improve strength and gait.

Performing her battery of technical measurements provides Rosen with an objective viewpoint that can be beneficial to patients.

“Because I don’t carry a caseload, the other real benefit is I can take a truly objective look at patients and tell the truth. I’m not saying there’s anything wrong with a therapist who becomes attached. In fact, if they didn’t lose some of their objectivity, there would be a problem,” Rosen says. “But when you are around people for a long time, you lose a sense of full objectivity; you miss things.”

No matter how wired the gait lab becomes, technology will never edge out the vital human component. Rosen is often surprised at how her initial thoughts can be changed when she sees the results of the computer-generated data.

“A lot of people think that the computer does our job; they think that the computer tells us what’s wrong with somebody—and that’s not what happens,” Rosen says. She notes that the computer provides outlines of what is abnormal—if a patient should be able to bend their knee a certain amount, it tells the PT if that is not happening. “But there are a lot of different causes for why you can’t bend your knee, and that is why physical therapists are involved in all of this. In addition to doing this walking testing, we also do the regular physical therapy work: range of motion, spasticity assessments. The computer gives us the what, and we have to figure out the why.”

Dana Hinesly is a contributing writer for Rehab Management. For more information, contact .

Stepping Out on the Cutting Edge

Therapists have the advantage of 21st-century technology to provide their clients with effective gait analysis.

Analysis and assessment are time-tested tools, but they do not always tell the whole story. Today, therapists studying a patient’s stride can use modern technology to show them more than meets the eye. Among those technologies most commonly found in the modern gait analysis lab:

Addressing a problem that affects 40% of the population.

Dizziness is a general term often used by patients to describe their symptoms. Prescribing the appropriate rehabilitation program begins with the clinician asking specific questions to better define their dizziness.

According to the National Institutes of Health1 and the National Institute on Deafness and Other Communication Disorders,2 dizziness affects 40% of the population at least once in their lifetime and is one of the most common reasons older Americans consult a physician. Dizziness can be caused by a variety of problems, including viral or bacterial infection, head trauma (car accident, fall, etc), vascular dysfunction, neurological disorders (stroke, multiple sclerosis, etc), and inner ear pathology. People afflicted with a dizziness disorder may experience vertigo, imbalance, visual problems, or lightheadedness.

Many types of chronic dizziness can be managed successfully with a specific type of therapy called “vestibular rehabilitation,” which involves specific exercises and maneuvers designed to reduce dizziness, increase balance function, and increase general activity levels. Vestibular exercises are designed to promote central nervous system compensation for vestibular system deficits, while repositioning maneuvers are used to remove debris (otoconia) from the canals of the inner ear in patients with position-dependent dizziness. Some of the more common vestibular conditions include:

Benign paroxysmal positional vertigo (BPPV): a condition where patients experience episodes of vertigo, particularly after position changes such as bending down, reaching up into a cabinet, or getting up from bed. BPPV is typically of insidious onset and can be reduced or resolved with as few as three sessions of therapy. The rehabilitation focus includes a series of manual procedures called canalith repositioning maneuvers.

Unilateral vestibular hypofunction (UVH): a condition where patients experience oscillopsia that is intensified with head movements. Typically, there is a history of viral or bacterial infection. Improvement or resolution of a UVH usually requires six to eight sessions of therapy spread out over a 6-to 8-week period. The rehabilitation focus includes a progressive series of exercises called adaptation exercises.

Bilateral vestibular hypofunction (BVH): similar to a UVH with the addition of marked disequilibrium. Symptoms are usually severe and less amenable to therapy. There may be a history of taking ototoxic drugs such as gentamycin that destroy the cilia in the bilateral vestibular structures, causing extreme difficulty in maintaining one’s balance. Improvement of a BVH usually requires months to years. The rehabilitation focus includes a progressive series of exercises called “substitution exercises.”

General motion sensitivity: a condition where patients experience motion-induced dizziness that does not present as BPPV, UVH, or BVH. There may be a history of motion sickness with travel, especially when trying to read in the car as a passenger. Improvement or resolution of general motion sensitivity usually requires six to eight sessions of therapy spread out over a 3- to 6-month period. The rehabilitation focus includes a progressive series of exercises called habituation exercises.

If the patient primarily complains of lightheadedness, they may be suffering from orthostatic hypotension. A good indicator is if symptom provocation is associated with coming up from a lying position or if there is an >20 mm of mercury drop when going from supine to sitting. This condition needs to be referred to the patient’s physician for medical management.

In addition to a comprehensive subjective examination, a thorough physical screening examination is requisite when dealing with a dizzy patient because of the broad range of pathologies that can contribute to dizziness. Cervical stability, cervical vascular tolerance, central-mediated vestibular testing, upper motor neuron testing, and cerebellar testing should be included in the physical exam. An excellent resource for learning the comprehensive components that comprise a subjective and objective physical or occupational therapy examination is the textbook entitled Vestibular Rehabilitation.3 A neurologist or ear, nose, and throat (ENT) physician may order an electronystagmography (ENG) to confirm vestibular pathology. The ENG is typically performed by an audiologist and includes a series of computerized tests that look for vestibular dysfunction or other neurological problems by measuring nystagmus (involuntary eye movement).

A 37-year-old female was referred to therapy for vestibular rehabilitation with a nonspecific medical diagnosis of dizziness. The patient complained of chronic dizziness without clear mechanism of injury. Further subjective examination revealed that the primary complaint was vertigo, which was provoked by bending over or getting up from bed. Further physical examination determined that her blood pressure was normal. The therapist performed a Hallpike-Dix test and confirmed the clinical diagnosis of BPPV affecting the right posterior semicircular canal of her right ear. A canalith repositioning maneuver was performed several times over the course of two therapy sessions and her BPPV was resolved. The patient was advised to minimize bending motions and to avoid sleeping on her affected ear for 24 hours after each session to maximize the effect of the canalith repositioning maneuver. (Figures 1a, b, and c show a Hallpike-Dix test; Figures 2a, b, and c show a canalith repositioning maneuver).

An excellent resource for physical therapists, occupational therapists, and their patients is the Vestibular Disorders Association, or VEDA, at www.vestibular.org. VEDA offers a variety of services, including listings of vestibular disorder definitions, health care providers with expertise in managing dizzy patients, and support groups. VEDA also provides information for health care providers including publications, videos, and continuing education workshops. Therapists can elect to have their name and clinic information made available on this site as well.

Eric G. Johnson, PT, DPTSc, NCS, is an associate professor of physical therapy at Loma Linda University, Loma Linda, Calif. Johnson is a board-certified neurologic specialist and certified vestibular therapist. His current activities in the area of vestibular rehabilitation include teaching, research, and clinical practice. Johnson teaches introductory and advanced CEUs in vestibular rehabilitation annually at Loma Linda University, as well as in other regions of North and South America. 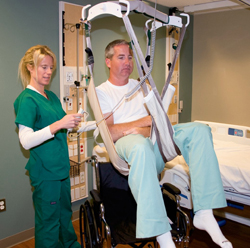